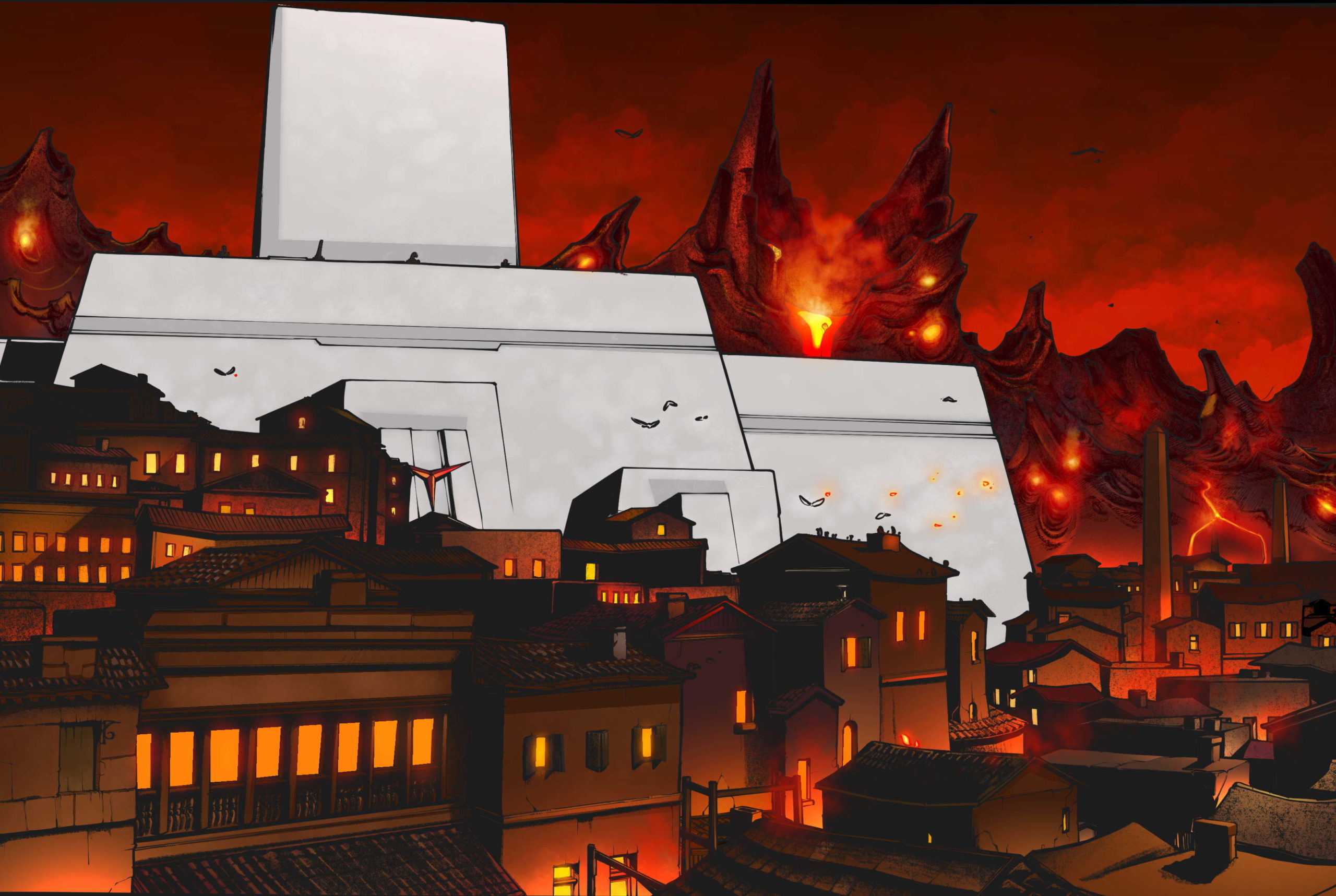 Capital Moa looked as it always did; on fire. The peaky city stood amid the massive black crags and red-rimmed volcanoes of Moa’s Upper Range. Formed mostly of lava rock and arranged redstone, Capital Moa’s true size was tough to gauge by any vantage point, of which there were hundreds. Ashen buildings and homes wound their way through the mountains by the thousands, carefully placed away from the most dangerous patches of land.
Two streams of glowing magma, known as the The Red Rivers, trudged along wide twisting channels through the main populace, providing an even warmer hue to the already hot surroundings. Men and women stood on massive reinforced banks, scooping out metal buckets of the slow moving lava and pouring it into molds to cool, bound for nearby construction. Other workers wielded saws to cut the soft rock that was forming along the edges.
The Red Rivers needed tending no matter what, but the added benefit of free bricks never hurt the pocket of a Moan. Many even exported the stone beyond Capital Moa to other cities and nearby States. Cerada, off to the west, never needed any due to the powers of their Coreborne; however, Yond, Ennen, and Kempre were often purchasers of Moa’s famous lava rock.
In the heart of the city, looming buildings cast their soft shadows, smudging darkness across the already hazy landscape. Many of the structures still proudly displayed their wounds from the quake decades back, their owners deciding not to cover up the visible history of their proud land.
Off in the distance, stuck on the side of the largest mountain in the Upper Range hung Sidefire, the Champion’s arena. Vividly black, angular, and dripping with lava, Sidefire was the most exciting place in all of Moa with its battles for supremacy between the State’s most talented Pit fighters. On the zig-zagging roads up to the arena, small caravans could be seen bringing goods for the approaching fight in the evening.
At the highest point in the center of Capital Moa stood The Pearl. Castle and home to King Otoh and the royal family, and by far the most important building in the entire State. Constructed entirely of white marble, it was built to be a gleaming beacon of Moa after the Midnight Treaty formalized the twelve States 74 years ago.
The Pearl was a masterpiece; one of the most beautiful buildings in all of Ismet, glowing even in shadow. The white walls of marble imposed their presence through smoke, with three rows of outer gates standing at the height of ten men, and the central tower twice that. Between the gates were lush parks and midyards of varying privacy. While many were open to all of Moa, there were far more that allowed only for the royal family and the staff of the castle.
Keeping the Pearl white was a constant endeavor. One hundred Moans stayed under constant employ from the State to keep The Pearl free from soot and smoke. Every day, hours and hours are spent bringing up large jugs of water to the top of the castle so that the scrubbers can repel down, cleaning with them as they go.
Rondo, a young scrubber with shaggy dark hair poking out from a wrapped hat, stood at the top of the central tower staring across the city. Despite the haze and fire, no one could argue Capital Moa’s beauty. Rondo’s eyes drifted towards Sidefire, trailing the small caravan of meats and plants to be grilled and sold to those fortunate enough to attend the fights that evening.
Rondo let out a sigh. He’d lived in Moa for 18 years and only gotten to go to Sidefire once when he was a child. He hadn’t truly gotten to appreciate Moa’s Champion system as an adult, or as a fan. Hearing the tales recounted in taverns only served to strengthen his desire to attend a real battle between Moa’s strongest Coreborne.
Apeet, an older, scrawny man with a long beard heard Rondo’s exasperation. They were the only two scrubbers left on the top of the central tower. The rest had already descended with their jugs and brushes as the sun thought about setting. Apeet slowly crouched over the edge, following those before him, and began to repel backwards down the tower, scrubbing as he went.
“You know, Rondo, if you actually get to scrubbin’ you might be able to catch a little bit of the action from your secret spot.” Apeet said.
“Not tonight, sadly. We got the late start today, and it takes about three bells time to make that climb. Looks like I’m stuck to drunken tales from the tavern again.” Rondo replied, picking up his jug and slinging it across his shoulder gently to spill as little water as possible. The jug swung like a pendulum, nestling itself well in between the dozens of rags that were tucked into the holes of a Scrubber outfit.
“Fight or no fight, still don’t wanna be here all day, do ya?” Apeet hollered upwards.
“Yeah yeah…” Rondo said while looping his anchor rope through metal ringed ports in the waist of his pants. After taking one last look at Sidefire for the day, he effortlessly leaned over the side of the tower, beginning his descent into the invading gray of the Pearl’s late afternoon walls.

It didn’t take long for Rondo to catch up to Apeet despite him starting after the seasoned scrubber. Whatever Rondo did, he always found the rhythm to it.
“I swear, after 25 years of doing this job, it still seems like this tower just gets covered more and more every day.” Apeet said, already covered in soot again.
“Maybe you’re just doing an increasingly worse job, Apeet.” Rondo said, grinning towards the old man.
“Listen here you little shit. I’ve been cleaning this castle since you came out of your mom as white as this here marble…” Apeet rallied back, as the two of them often did. “…and furthermore I’ll have you know it hasn’t gotten any better since you joined the crew.”
“Well Apeet, since it’s clearly one man’s word versus another’s. I guess the only way to solve this contest is with a race to the bottom!” Rondo spouted, kicking his cleaning rhythm into a faster pace.
“Cleaning is not a race, Rondo. Cleaning is a responsibility.” Apeet said, slowly being overtaken by his younger cohort.
“That sounds like something a second place scrubber would say.” Rondo said as he continued on his path downward.
Dozens of men and women continued their last descent of the day, scrubbing the Pearl’s last gray wall with a hot Moan sun turning the sky behind them increasingly redder. Like the rakes of a sanded garden, they left a white trail behind them. Once they all reached the bottom of the central tower, the Pearl would finally be polished for the day, and clean enough for King Otoh until the morning when the sun would rise once more through the smoke.

Next Chapter – From Farther Dunes